Can I record a test without mouse scrolling being captured?

Each time I record a test a lot of scrolling is recorded. Deleting that is cumbersome. Please could you let me know if this is possible to switch off scroll capture?

Also you can easily delete a bunch of steps if you click on the checkbox of the first step: 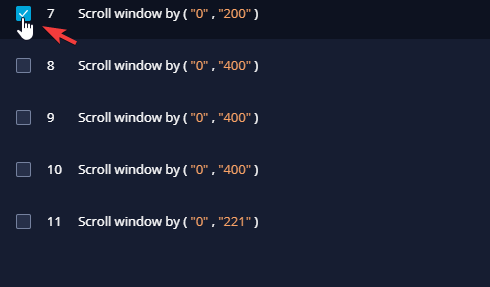 And then press the shift key and click on the last consecutive step:

Thank you for your reply. It is not exactly what I wanted(It would be great to have such feature) but your tips are very helpful.

Hello, about 4 months before whenever I record, the scroll window command was automatically there. But now it’s not. Due to this when a test case failed I can’t able to see the screenshot since it’s not scrolling. Is there anyway to activate testproject.io to record scrolling too again?? I don’t know where I messed. I just want to record even the mouse scrolling.

Hi is not working for me as well.

@artem.kuznetsov, Hi is it a problem or test-project have a new functionality…?